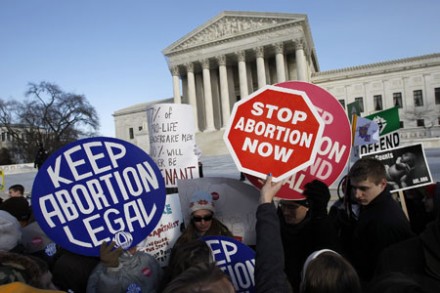 I was 17 weeks pregnant, with my first baby, when the results of an amnio told me that the wanted child I was carrying was not healthy. I have always been pro-choice, and never considered it a moral dilemma to terminate a fetus with severe Down’s Syndrome, or other life threatening, or debilitating abnormalities. Although I was aware that my advanced age of 39 increased my risk of potential problems, I was totally unprepared for the results from this technology, and the choice I would have to make.

A decision had to be made quickly, before I felt her moving inside me. I knew if I felt her I could never give her up. To a certain degree, she was still an abstraction, even though on ultrasound I had seen her entire body, each vertebrae of her backbone, the two hemispheres of her brain, her tiny feet and hands moving about. “The ghost in the machine,” my husband had called her. I held my belly and begged my daughter to tell me what she wanted me to do, knowing the decision would be mine, feeling the weight of that decision ripping apart the fabric of my tightly woven self-image.

What kind of person was I that I would kill my daughter because she wasn’t perfect? Faced with the probability of a slow child, I realized my expectations for [and from] my children were more than I had considered. Maybe too much.

It occurred to me that most of us go through life thinking we are generally good, honest, caring people because this view is rarely challenged, as most of our actions aren’t based on critical, pivotal, character-defining decisions. From the moment I got the amnio results, I knew my life would never be the same again. Technology had given me insight and now forced me to make a choice.

Probably the hardest decision of our married life, but it was ours to make in a state where abortion is still legal. Only we, the parents of the pregnancy, could decide what we felt capable of providing our child. If we lived in Texas, the state could force us to give birth to an ill baby, spend everything we make on drugs, specialize schools and care, and damn us to the unbearable torture of watching her struggle daily, likely for the rest of our lives.

The trick is, finding a way to live with that choice.